Home › A visitar › Best Things to Do & Places to Visit in Poblenou, Barcelona

Before the Olympics in 1992, El Poblenou had an atmosphere and appearance of an industrial zone almost abandoned. With the reforms of the city, the neighborhood was full of life: restaurants, bars and all sorts of tourist attractions seasoned now its lively beaches. Since the Olympic Games, this region continues to be constantly evolving and increasingly becoming one of the most active and dynamic neighborhoods of the city.

Pueblo Nuevo, (in Catalan Poblenou or El Poblenou) is a district of the city Española of Barcelona, it is located in the district of San Martí de Provençals. The area where the neighborhood was formerly formed by swamps, lagoons and grazing fields and cultivation. At present, the 22 @ Barcelona Plan aims to convert the former industrial and logistics territory into a scientific, technological and cultural platform by creating new technologies and research companies. It became, in the late nineteenth century, the region with the largest industrial concentration of Catalonia and one of the most important in Spain, for what was known as the «Catalan Manchester» and awarded the sculpture of San Salvador.

WHAT TO DO OR SEE IN POBLENOU 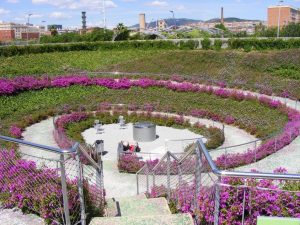 The imprint of Jean Nouvel, a French architect, is seen in the new Barcelona that grows around the Diagonal Mar. The new Parc Central del Poblenou is a naturalist architectural gem that combines a wide variety of environments. A much needed green lung in the area of the former industrial Poblenou. In the spring of 2008, this park was designed by the French architect Jean Nouvel. A lung of 55,000 m2 divided between the streets of Bilbao, Marroc, Bac de Roda and Diagonal, which clearly defines the integrator and the social spirit of the new district of Poblenou. 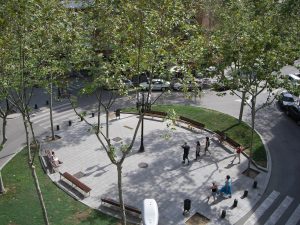 This walk articulates the center of the cultural, social and commercial life of Poblenou. As we walk through it, we enter a space that was industrial in origin and see how breathing new times, tradition and community life have always defined the Poblenou neighborhood. Although it has been dubbed Passage de Triomf (Paseo del Triunfo), everyone has called this street since its inception, Rambla del Poblenou; This name was officially adopted in 1986. It is a walk that aligns the elegant classical features of the sea to the mountain, structured in sections of rectangular and circular shapes. Its origins go back to 1853, when it was established in the Cerdà plan, surrounding an industrial Poblenou which began to develop in the district of Sant Martí. The inhabitants of this district saw the ideal of walking for the space of the march and the social relations.

The Can Framis museum of the Casa Vila Foundation

Can Framis Museum of the Casa Vila Foundation

At present, as a museum of contemporary painting contemplating the pictorial background of the Foundation of Casa Vila. In this document about 300 works, dating from the 60s to the present day and belonging to several artists born or living in Catalonia are exhibited. In the Espai Ao of Can Framis are celebrated the temporary exhibitions. Located between the beaches of Nova Icaria and Mar Bella, is the result, like its neighbors, an urbanism which, with the thrust of Barcelona Olympic 92, wanted to bet on opening to the sea: complete integration beaches with spaces Greens, gardens and surrounding neighborhoods. 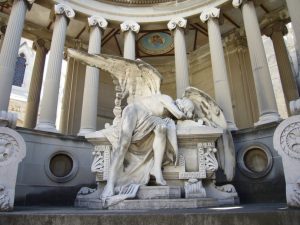 To understand why a cemetery can also be an art, just approach the Poblenou. It has two distinct areas the original, and which increased during the second half of the nineteenth century. It is dotted with places of great artistic, historical and emotional interest. There is a small museum of funerary sculptures and packed nooks of great harmony. It is a work of the Italian architect Antonio Ginesi, and was the result of the reconstruction that took place in 1819, following the destruction suffered by the former cemetery of the East in 1775 to the hands of Napoleon’s troops. Neo-classical style Sober, says elements of Egyptian inspiration. It contains the tombs of such illustrious figures as Josep Anselm Clavé, Serafí Pitarra or the Maldà family. There are also anonymous tombs such as the revered tomb of the «little saint» of Poblenou, a local child who still makes many offers, or Gypsies with his sculptures, often realistic, like the well-dressed man carrying in his pocket of its indiscriminate togetherness.

Opening hours: Every day at 8am to 6pm

We offer a selection of reviews left by visitors to Poblenou on the TripAdvisor:

“Evolution” Evolution of the city, preserves the essence of architecture forever. It is a fun place to walk, sit and read or drink.

“Pleasant area for housing” We really enjoyed our stay in Poblenou, which was close to the beach and much quieter than the center of Barcelona. A pleasant 15 minute walk along the beach to the center, which was very relaxing. Very nice area with a lot when we went there, but still close to amenities. There are plenty of restaurants and bars and connection to the city center.

“The greenery of Barcelona” Poblenou is a great community where you can watch and spend time with the locals. It is located not far from the city center and you can take the Rambla from the whitewashed beaches!

“I love Poblenou” This is much less tourist area of Barcelona. But a very nice place to visit. Most of the local restaurants.

“Walk into Poblenou” The area is great with a nice atmosphere … from the tourist center of madness, but still close to the attractions. Poblenou has good restaurants and bars, with fast transport links (yellow line), a beautiful four Rambla, beautiful beaches and a relaxed atmosphere. What can you ask for? I love this neighborhood.

“Poblenou” We loved Poblenou so much that we will come back for a third time. We stayed at the Travelodge, which is cheap and cheerful, and will stay there in September to see the Merce Festival. The walk to the beach is through a Rambla is beautiful and the beach is clean and nice. We often went on the walk, at night, along the beach promenade and eat. If you want to stay in a less crowded place one of the many restaurants. So this is the perfect place.