Home › A visitar › Sant Antoni: Best Things to Do in this Neighborhood of Barcelona 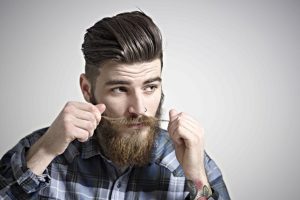 Typical look of a yuccie

The small neighborhood of Sant Antoni is in the Eixample Esquerra district (Barcelona), and has the same typical grid layout as other parts of Eixample. It is well situated between others famous neighborhood: Poble sec y El Raval. It is especially known for his market which is the oldest and most popular in the city. It is becoming a very popular neighborhood thanks to the new shops and restaurants that recently opened.

It also popular for the yuccies. The yuccies are the new hipsters they are young urban creatives that are born in comfort and are educated intelligent millenials willing to work for themselves in this internet environment or create startups.

Let’s take a deeper look at this trendy neighborhood of Barcelona.

First of all you can access it easily by transport. 3 metro stations with three different lines are present in Sant Antoni :

Sant Antoni is also really well situated in Barcelona and you will never be far from importants places like Sants Estacio (15 mins with L3 Green), Sagrada Familia (20 mins with L2 Purple) and Las Ramblas/Plaza Cataluña (15 min with L3 Green)

What to do & what to see

Like it was said earlier this is the most famous architecture of the neighborhood but also the most popular market in Barcelona. Every person who comes visit Barcelona must see this beautiful and ancient place. The Sant Antoni market was built in 1872 and was designed by Antoni Rovira i Trias, a local urban planner that is the author of other markets in the city.

The market is closed now since it is being restored at this time, you can see the beautiful façade and the building but the food stalls on the inside moved to another location temporarily.During the week you can find, in this market, different stalls outside selling all kinds of goods, from clothes and shoes to homeware. On the inside it is like any local food market selling fruit and vegetables, fish and meat. The weekend, the market changes completely because on Sundays, the market holds a second-hand book market on the outside. Stamp collectors and book lovers (comics, magazines and books of any kind) gather to browse along all the second hand offer displayed in Sant Antoni.

How to get here: The closest stop is Sant Antoni (L2), the purple line. 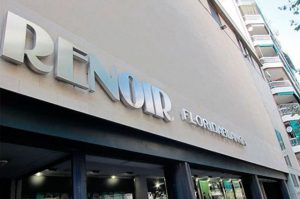 The Renoir Floridablanca cinema is popular in Barcelona for the cinematographic lovers since the films here are shown in their original language. Located in the city center, between the metro stations of Sant Antoni and Universitat, this place hosts seven screens and has an up-to-date repertoire of world movie premieres. It is a really nice place to see a movie with friends and family.

The Moritz Bar and Design Store

The Moritz Bar is situated on Ronda Sant Antoni right in the brewery building, with more than 150 years of history. Inside you can see a tiny exposition of professional beer-making equipment and a lot of retro posters on the walls. It also has its own souvenir shop, M-Store, where you can find t-shirts, utensils, accessories for your car or flat, extravagant books, and street art albums. You can also eat there since it is a restaurant which is going to lead to this list of nice restaurant in Sant Antoni that you should try alone, with friends or family.

The avenue of Mistral is a street in the Sant Antoni neighborhood of Barcelona,España. It is a very commercial street and will definitely remind you about Las Ramblas. This is the perfect place to hang out with your family and friends since it has shops and restaurants.

It has become a trendy bar in the area, they are located in a little alley and have a very nice terrace. The name of the bar comes from a famous writer Pere Calders that is known to be exiled in the Spanish Civil war to Mexico. Their vermouth is home made and they have hummus, pizzas, sandwiches and a wide selection of tapas. 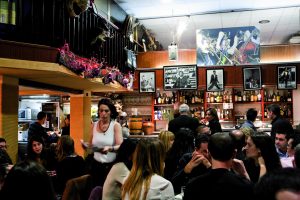 This is the ideal place for those who want to sample healthy and creative tapas, there are all kinds for all tastes and at a good price with excellent music.

Florida has a restaurant with a refined relaxed atmosphere. Perfect for a lunch or dinner between colleagues thanks to its extensive menu and a large selection of international and Spanish dishes. The staff is friendly and the tiramisu is really something wonderful! It is near the Renoir Floridablanca cinema if you want to enjoy a nice meal before or after it. 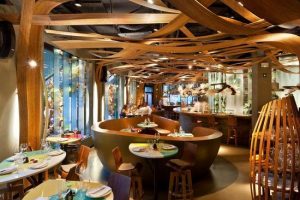 This Japanese restaurant is at the edge of the neighborhood and right next to the Poble Sec. Located on the Avenue del Parallel this restaurant serves an excellent Japanese cooking. You will be impressed by the very particular design of the interior.

An other idea if you want to eat well and not spend a lot of money is Tapantoni. Tapantoni is a website that, for two weeks, will allow you to eat tapas and beers for 2.50€. It is from the 12th May to the 28th.

Unfortunately all great things have flaws and Sant Antoni is not an exception. The flaw here is the lack of green zones. There is about 6 little zones/parks in Sant Antoni but they’re not really green, they are just entertainement zones for the kids with a few playgrounds. But if we look around Sant Antoni we can see that the Joan Miro Park is not far. Designed by a group of architects it has huge space of green where you can relax and  enjoy the sun of Barcelona. 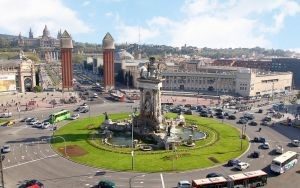 Another great place near Sant Antoni is the Plaza España. With 34,000 m2, Plaza España is the second largest square in Spain. It was built in 1929 for the World Expo. It is located in Gran Vía, at the foot of Montjuïc Mountain.  The square that formed part of the urban plan of Ildefons Cerdà serves as the border between the four most important districts of the city: Eixample Esquerra, Sants, Sant Antoni and Poble Sec. In Plaza España there are several interesting choices for activities or sightseeing: the first is to take the Avenue Maria Cristina between the two Venetian towers and climb the stairs to the National Palace (which is the National Museum of Art of Catalonia). In this museum you will be able to admire one of the most important Roman collections in the world. But you can also go to Commercial Center Arenas which is directly on the square (you can’t miss it, it is enormous!).