Home › A visitar › The five most beautiful churches in Barcelona

Beaches, museums, activities, and ancient districts make the charm of the city of Barcelone, this is why this city welcome every year a lot of visitors. But the Gotic Cathedrals with Catalan style strongly attract tourist of the whole word.

If you are a passionate of architecture and you are visiting Barcelona, don’t miss the five most important Cathedral of Barcelona. You will be amazed by their beauty. 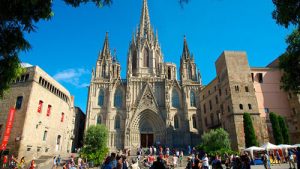 The Cathedral of Barcelona, a Gothic Building

The Cathedral of Barcelone whose complet name is the cathedral of La Sainte Croix and Saint Eulalia (the Catalan name is The Cathedral of Santa Cruz and Santa Eulalia), is located downtown, more precisely in the Gothic district.

The Cathedral of Barcelone represent one of the architectural symbols of this city. It is one of the monument that you should visit on your getaway in Barcelona. 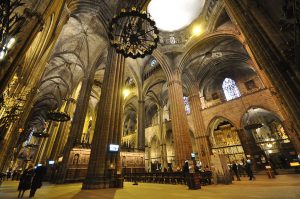 The Cathedral’s name is Saint Eulalia in the memory of the one who was the boss of Barcelona. According to a legend, Saint Eulalia was a young girl who was nakedly exposed on the city’s forum. The Roman authorities decided to lock her up in a barrel full of knives and glass, and throw the barrel in the slope of the street. Eulalia was finally tortured by thirteen torments for corresponding to her age and was crucified on a cross.

This cross becomes the symbol of the Cathedral:

This Cathedral is the Catalan Gothic style. The Cathedral’s construction began in the XIIIth century, on the reign of Jacques II le juste. Its construction was slowed down and eventful beacause of the war and ends in the XIXth century. The works of the Cathedral will last from 1298  to 1450, 152 years. 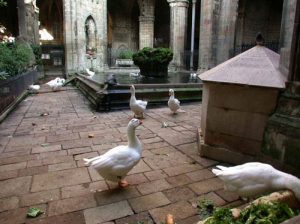 The Cathedral’s tower is 50 meters height and 40 meters wide. The charm of the Cathedral is its facade full of reliefs. We can see the inside of the Cathedral, a large nave with impressive dimensions and many chapels, the main is Capella Major. The basilica is lit by tall windows. It is also possible to visit the cloister, the presbytery, the museum and the climb to the vault. Outside the cathedral, you will have the opportunity to visit a small garden with palm trees and a fountain.

Do not leave without seeing the cloister of the cathedral which is garded by goose. These goose refer to Santa Eulalia, before dying in martyrdom, she was the goose keeper. In this cloister we count 13 goose, they symbolize the age of Santa Eulalie when she died. La Sagrada Familia is the pride of Barcelona, it is the most visit building in Barcelona which counted 3.200.200 visitors in 2014, it is located in the Eixample district and is the work of the architect Antoni Gaudí. Although it is not completely finished it still fascinates the tourists. This basilica is the jewel of Catalan modernism.

The architect Antoni Gaudí (1852-1926) is the one who decided to build the Sagrada Familia, he dedicaded sixteen years of his life for its construction, but he died by accident in 1926 and will never see the accomplishment of his work.

The construction began in March 1882 by Antoni Gaudí and we will see the end in 2026. It is only at the age of 31 that Gaudí decided to build this monument thanks to his imagination. The funding construction if the basilica was made by donations, it is what Antoni Gaudí wanted. Unfortunately, todays donations are rare, and the basilica continu its construction by the money from paying entries of the visitors. Moreover, Gaudí left plans that are now exposed in the Museum of the Sagrada Familia, but some of them vanished. These plans were left for the successors of Gaudí.

The Saint Barnabas Tower and a part of the outer side of the apse wall, were declared in 2005 World Heritage by Unesco. The Basilica was consecrated by Pope Benedict XVI on November 7, 2010. 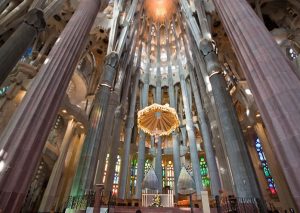 The Sagrada Familia is formed with five naves, a cross, an apse, an outside ambulatory, three facades and eighteen towers: twelve to symbolize the apostle, four for the Evangelist, one for Mary and one in the center to symblolize Jesus. The tours of the towers offer a magnificent view of the city and the aerial parts of the basilica. Two towers are accessible by elevator: the tower of the nativity “Torre del Naixement” measuring 55 meters is the oldest. The passion tower “Torre de la Passió” measuring 75 meters is the most recent. Finally it is essential to visit the Museum of La Sagrada Familia to see the progress of Gaudí, his plans and methods of construction. We can discover the rough drafts, photos and models of Gaudí that led him to create this basilica and understand its history. Santa Maria del Mar is a church with a gothic style from the XIVth century and is located in the Ribera’s district, one of Barcelona’s oldest disctrict.  It represent of the most beautiful basilica of Barcelona. It was built between 1329 – 1389 by the architect Berenguer de Montagut, in collaboration with Ramon Despuig. Santa Maria is an exception from the other churches due to its 55 years of construction, while the constructions of middle age churches was generally done in more than a century. The first person to have laid a stone is King Alfonso. In the 1930s, some earthquakes and fires destroyed a few parts of the basilica and lost important works of art. But after the war, several architects begin the material reconstruction of this temple.

Los bastaixos (the carriers of the port)

At the time, the poor lived in the port area. These are the people who contributed to the construction of the Basilica Santa María del Mar with their own hands. These men carried stones on their backs all the way back to the building site of this basilica. They did this work every day. We can see the bastaixos on the door of the main entrance of Santa Maria Square.

From outside the basilica Santa María del Mar appears to be heavy because it is on a narrow square, but if you enter it you discover a lightness and a beautiful place. The facade has a large rose window. Its structure is composed of 16 octagonal columns of 1.60 meters thick and 13 meters apart, there are three naves of the same height, a very large central, typical of Catalan Gothic architecture and two other lateral naves. The length of the basilica is 80 meters, its width is 33 meters. Finally, the basilica has large stained glass windows.

The church of Sant Just i Sant Pastor The basilica of Sant just i Sant Pastor is considered as the most ancient basilica of Barcelona.

The basilica of Sant just i Sant Pastor history:

The Basilica Sant Just i Pastor is located in the heart of the Gothic district in Barcelona on the Sant Just Square, it is hidden between the oldest streets of Barcelona. The church belongs to the Gothic style and was built in the 15th century. Its construction began in 1342, but it was not completed until 1574. It was in 801 that King Louis the Pious took over the reconstruction of Barcelona and it was at that time that a temple was built for Saints Just and Pastor. Then, in place of this Romanesque church, was erected the basilica Sant Just and Pastor in 1342. Outside the basilica there is a fountain, a terrace with tables and chairs. The basilica has a single nave with side chapels. It houses several altarpieces. There are also several tables with sculptures of the life of Jesus and the Virgin. The octagonal tower of the fifteenth century gives height to the basilica. The beauty of this temple is characterized by a single nave with a polygonal apse. The dimensions inside the basilica are surprising, and the simplicity of this place symbolizes the traditional Catalan Gothic.
From the bell tower of the basilica, you can enjoy a beautiful view of the city of Barcelona. The Temple Sagrat Cor, the spanish version of the french Sacred Heart

The statue’s open arm evoke the welcome. The great travelers may notice that the Temple Sagrat Cor resembles the Sacred Heart of Montmartre in Paris because both are on the top of the mountain.

The temple is composed of three parts: the crypt, the church and the statue of Jesus Christ. The crypt is well lit since there are windows around the entrance that make it brighter. Its walls are neo-Byzantine style and are built in mosaics. Inside you can see sculptures created by Eusebi Arnau. In addition, the church is decorated with four rose windows and large stained glass windows. We can see in the windows the following sentence in Latin: “tibi dabo“, the name of the mountain, which means “I will give you“. With a pay elevator you can reach the top of the church and approach the statue of Christ. The top of the church offers a magnificent view of the city.