Barcelona has museums known and recognized worldwide. But, in the shadow of these international references, it also houses original small museums that not many people know. Let’s discover some of them: 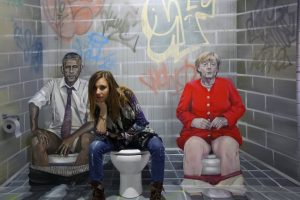 A small museum dedicated to optical illusions, in what it practically becomes a virtual experience. This museum not only allows to take a camera, but also recommends it. The rooms of the museum offer enormous murals of diverse thematic, realistic and fantastic, that make you feel part of the scene. Following precise instructions and using the previously marked points, you will be able to make very funny photos, in which you can appear walking on the ceiling like Spiderman or sharing restroom with Angela Merkel, or fighting to the death with a giant octopus, to cite only three examples.

Where it is: Near the Ramblas. Carrer of the Painter Fortuny, 17

Opened in 1909, this curious museum, even a little freaky  (Chucky, “the devilish doll” would feel comfortable here), is in the grounds of the Tibidabo Amusement Park. Offers an impressive collection of automatons, mostly from the nineteenth and early twentieth century, all restored in a perfect condition. Many came from old itinerant fairs and one of the automatons has its internal mechanism displayed in a box of Glass, which allows to observe its operation. Quantity and quality, from one mechanical seer to an entire jazz band playing their instruments, going through the reproduction (a bit macabre) of a couple of executions. The automata are activated by the Visitors via pushbuttons.

Next to the Museum of the Automata is the Hall of Mirrors (Miramiralls), with Mirrors of capricious shapes that alter in a funny way the image of visitors who stand in front of them.

Where it is: In the mountain of Collserola

How to get there: the best option is the bus: in particular the line T2A that has stop in Plaza Catalunya.

You can also get on the Tibidabo funicular.

Admission: Included in the entrance fee of the Amusement Park. It costs 28.5 euros for Adults and includes the Museum and all attractions. 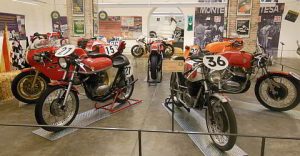 Museum that takes a tour of the history and evolution of motorcycles and scooters. The museum contains more than 70 old and historic bikes, including brands such as Ducati, Bultaco, Harley Davidson, BMW, Montesa, Norton and Royal Enfield. The bikes are in perfect condition and will delight the fans. They also organize temporary exhibitions focusing on related topics.

Where it is: in the Gothic Quarter, Carrer de la Palla, 10

The temptation that almost no one can resist has its own museum in Barcelona in the Born. The museum was managed by the Union of Pasteleros of Barcelona. The visit includes murals explaining 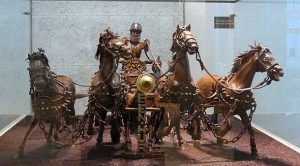 the history of cocoa and chocolate, an audiovisual session and the exhibition of impressive sculptures in chocolate on all matters; Monuments, sportsmen, animals, comic book characters, literature and cinema, etc.

There is also a historical exhibition of the machines used to process the product. As a curiosity, let’s point out that the entrance to the enclosure, instead of being a paper, it’s a candy bar. Obviously, the museum has a store where you can buy more chocolates. They also organize themed dinners.

MUSEUM OF THE FUNERAL CARS OF BARCELONA 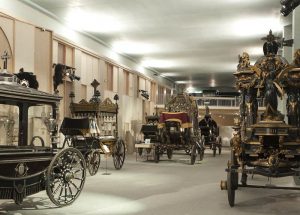 If the Museum of the Automata perhaps causes chills to some visitors, this one raises even more the bet. The museum, owned by the Societat de Cementiris of Barcelona, offers a collection of historical funeral hearse, of the kind drawn by horses, from the most elegant, baroque and majestic to the simpler ones, used by the common people. It also includes vintage dresses and corsages and ornaments for horses. The hearseare framed in photographs of the period corresponding to each one of them.

Where it is: In the Cemetery of Montjuïc. Carrer de la Mare de Déu de Port, 56

It opens only on Saturdays and Sundays, from 10 to 14 hours.