The GREC festival is mainly known for being the dance and theatre festival, but also for other arts such as music and circus. This festival is one of the most iconic, since its first edition was in 1976. In 2019, it’s the 43rd edition of this festival. This festival is celebrated in the summer, it’s a tradition. This festival takes place from July 1 to July 31, in different locations in Barcelona.

In this year’s edition, there are a total of 37 places for the festival, divided between the theatres and other spaces located in Montjuic and the rest of the city. Artists from all over the world perform at the GREC Festival, the main festival to show and see shows produced abroad. Many artists from Spain and around the world perform at the GREC Festival, with all kinds of shows.

The price of an entry is more or less than 15 euros, there are discounts for under 12, 16 and 35 years as well as for over 65 years.  Entry with or without discount, is not so expensive.

Going to this festival is a tradition that many people expect all year. 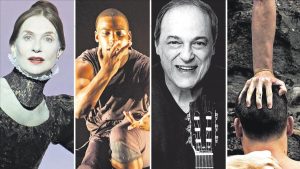 Going to the GREC Festival, for a week or for the month, is a tradition and a good way to discover arts.

Before going to the GREC Festival, come and relax in one of our comfortable apartments.