Home › A visitar › The best viewpoints of Barcelona

If you like visiting  historical sites and if the altitude doesn’t scares you, here is list of the best viewpoints in Barcelona. One of the best way to admire the city and its surrounding. View from the Park Guell

The Park Güell was built in by the architect Antoni Gaudí on the behalf of Eusebi Güell. Güell wanted to recreate the British residential parks, it is why he gave it the name “Park Güell” in English. The Park was inaugurated in 1922 and was declared UNESCO Humanitarian Heritage in 1984. This Park is a magic place who does not stop surprising his visitors. Besides its unique style, the Park Güell has another monument built by Antoni Gaudí “El Calvario”.  This monument is consisted of 3 crosses, two smalls and one large to represent the Christ. We can admire the view towards the South which extends to the beach, passing by the Sagrada Familia and Torre Agbar.

Address: Carrer d’Olot, 3. North of Gracia district  | Opening hours: Every day from 8am to 9pm 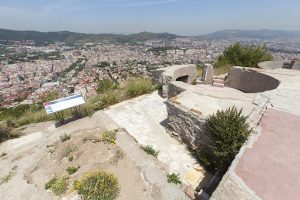 The city of Barcelone from the bunkers of Carmel

These ancient bunkers are at the top of the Rovira Tower and were built during the Spanish Civil War in 1937. They were known as anti-aircraft guns of Carmel, which served for air defense in Barcelona. Indeed in Carmen there are the most beautiful spaces you could find, you can also enjoy a better view than the one you have in the Park Güell, because of the several emblematic places of Barcelona we are able to see such as: The Sagrada Familia, The Mountain and the Castle of Montjuic, W Hotel Barcelona, El Mar a lo Lejos, Mapfre Tower y Hotel Arts, Templo Sagrada Corazón de Jesús, Collserola Tower, Central Térmica del besós. All without having to stand in line to get a picture. Photo of the city of Barcelone from the Tibidabo

Known as the magical mountain, the Tibidabo park was inaugurated in 1989, it is one of the best viewpoint to admire the city of Barcelona and also is one the first attraction park in Europe. Moreover this magical mountain is consisted of 3 others sites as: The Sagrat Cor Temple (Spanish version of the French sacred heart) which permit to see the city on its roof, the Collserola Tower, an engineering work of 288 meters height that offers a panoramic view from its point of view on the tenth floor. And The Fabra Astronomical Observatory built in 1901, the observatory deals with the development of scientific research with branches of meteorology, seismology and astronomy. The city of Barcelona from the passion Tower

The Sagrada familia is an artwork of Gothic style and the most visited monument of Barcelona and is consisted of 18 towers , it was one the project of the architect Antoni Gaudí. It is only at the age of 31 that Gaudí plans to build this monument thanks to his imagination. The construction begins in 1882 and will end in 2026. Today there are 8 towers of the 18 imagined by Gaudí whom decided that 12 towers would be dedicated to the Apostles, 4 to the Evangelists, 1 to Mary, and 1 to the Christ. The most recent tower is the passion tower “Torre de la Passió” 75 meters height, and the most ancient is the Nativity Tower “Torre del Naixement” 55 meters height. These two towers will allow you to have a beautiful view of the city of Barcelona. The shopping center is in a unique place, Plaza España one of the tourist points of reference in Barcelona. With its unique form and besides its large numbers of shops, it offers a magnificent panoramic view of 360º of the city of Barcelone from its floating terrace, to please its visitors.

Opening hours: Every day from 9am to 9pm Located at the end of the Rambla and near the beach, The Mirador de Colom allow us to enjoy a huge panoramic view of Barcelona at 60 meters height. This artwork of the Rambla was inaugurated in 1888 by the Universal Exposition and was dedicated to Christopher Columbus. From its point of view, you can admire bird’s eye view: the Gothic district, the Cathedral, Santa Maria del Mar, the Rambla, the Olympic port, the Forum, the Montjuïc Mountain, and the Collserola, the huge green lung that surrounds the city of Barcelona.